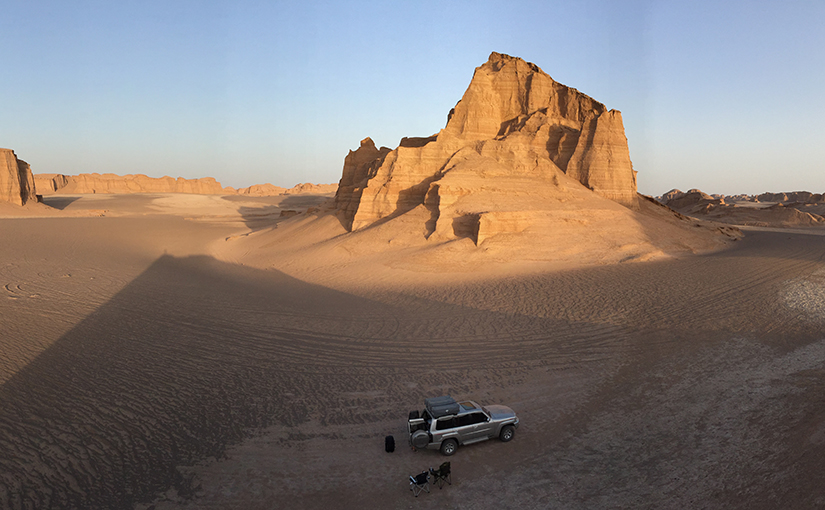 After an evening spent wandering the many bazaars of Kerman, we woke up the next morning, had some breakfast at the hotel and then loaded up the car with some provision for our planned camping night in the Kaluts.

On the way to the Kaluts we made a brief stop in Mahan, a small town about 30km south of Kerman. Mahan has a very unexpected UNESCO world-heritage garden, called Prince’s Garden (Shazdeh Garden) on its outskirts and a beautiful historical complex which contains the Shah Nematollah Vali Shrine dedicated to the renowned mystic and poet. We had read that it’s possible to climb on the roof of the mausoleum and although this was not allowed anymore, the security guard noticed our disappointed faces and opened the door for us allowing us to briefly climb up.

From Mahan we had to cross some fairly high mountains and the road quickly climbed to 2,700 meters passing through a couple of very green oases where the temperature was a pleasant 27 degrees Celsus. Once we started descending, approaching the Kaluts, this changed very quickly and by the time we got to 300 meters it was already 50 degrees.

The Kaluts is a large area of huge rock formations sculpted by millennia of strong winds in the South-Eastern part of Iran about 150km from the border with Pakistan (think Wadi Rum in Jordan, but with no people at all and more spooky looking rocks). The place also holds the record for the hottest ever recorded temperature on Earth so we were not very convinced about camping there. But once we left the tarmac behind and started driving in the middle of this spectacular desert, we knew we had to spend the night there.

It was not easy, as the temperature never really got below 40 degrees, but waking up at sunrise here is a truly unique experience. This was one place where I was very happy to be driving a Patrol Safari as the conditions were really tough and the fans had to work hard to keep everything cool. It was the first time ever seeing the engine temperature needle moving up close to the half point towards hot (it normally sits close to the C mark)!