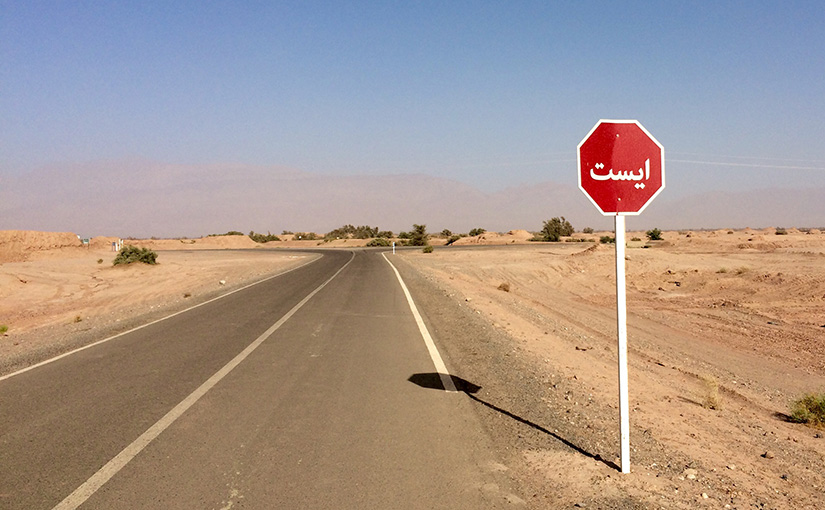 We raised a lot of friends’ eyebrows when mentioning that we would be driving through Iran. Indeed, the media seems to not be very favorable of Iran, and after reading most of the articles you would either be paranoid about being kidnapped or arrested.

But reality is very far from that. Everywhere we have been, from the big towns to the smaller villages, we have been greeted with kindness and hospitality.

We have been the only tourists at many of the places we have been but that has not made us fear for anything at anytime.

I felt that people in Bandar Abbas and Kerman are more conservative than Yadz, and a bit more serious, which intimidated me a bit at the beginning. But, then I realized that as soon as I smiled at them most often than not they would smile back at me, showing a bit of shyness, and not disapproval as I feared initially.

At some point we were in a little village  about 150km away from Pakistan, far from any main town and stopped for some water. The town looked completely deserted and we were not really sure of how we would be received as tourists. But the smile from the old man at the mini supermarket was so genuine and warm felt when he saw us, that it really made us think of how many places in Europe would still greet us like that.
We were also quite surprised to see how Iran doesn’t seem to be as religiously strict as we expected it. Yes, women cover up but it is not uncommon to see them wearing make up and accessories. They seem to walk around freely around town (although most of the times with other women) and I’ve seen plenty of them driving. On another hand, even though we are now in the month of Ramadan, most of the restaurants seem to be serving food and it was not unusual to see people eating, drinking or smoking openly. After being in Dubai for some many years, in which Ramadan is strictly observed and pretty much all restaurants closed from sunrise to sunset, I was extremely shocked when we saw two workers sipping on their chai and having some bread inside a mosque courtyard. The interesting bit is that everyone else on the way to the prayer also passed by them and didn’t even blink!

This will sound totally cliche but it is truly amazing to be able to experience it all first hand, being able to create our own stories, not the ones we see on TV.

We can’t wait for the rest of our adventures in Iran as we still have few days before reaching Armenia – writing this post as we drive to our next stop: Kashan!

6 thoughts on “Travel Safety in Iran”