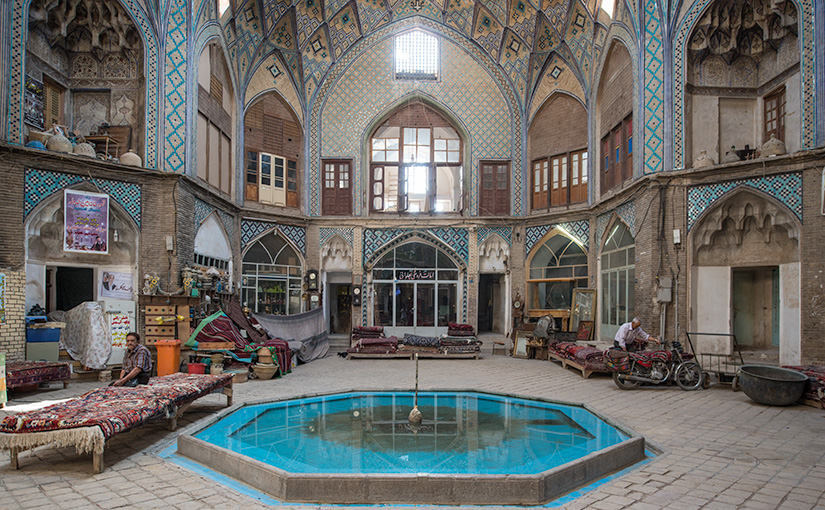 After leaving the South behind we headed North towards the city of Yazd and then onwards to Kashan.

The drive to Yazd was fairly easy and getting into town and finding our hotel (Malek-o Tojjar) was also very straightforward. We’re using Maps.me, a great free iPhone app, for most of the navigation and so far it has proven very good, finding most of the places we needed and navigating without a hitch. The hotel was also kind enough to organise parking for the car at a nearby hotel as ours was right in the middle of the bazaar with no space at all. Once checked in, we relaxed for a while until 5pm when everything opens up again for the evening. We wondered the back streets of the city feeling like we were transported back in time, photographing some of the beautiful old adobe buildings and having tea in a wonderful traditional house converted into a hotel. At the same place we also climbed on the roof just as the sun was setting to see Yazd’s famous badgirs (wind towers) bathed in the late afternoon light.

The next morning we didn’t want to rush too much so we only left around 11am aiming to get to our next destination Kashan in about 4 hours. This changed when about half way there we decided to get off the highway and turn towards a place we had read about in Lonely Planet – Abyaneh. Abyaneh is a small stepped village with houses made out of mostly red clay and placed in a beautiful valley at about 2000 meters. We took an off road track around the village passing small water streams and men with their mules. In the actual village, many women wearing very flowery dresses and scarfs were sitting down, chatting the afternoon away – pretty much the same as it would be anywhere else in the world.

After this wonderful detour, we finally made it to Kashan and a very cute hotel set in a traditional merchant house. It was a bit too late to see anything, but we did manage to grab a bite to eat at a very cool restaurant also set in an old style mansion. The next morning we woke up very early grabbed a quick breakfast and then went to see the bazaar which was probably our favourite so far as it was not too busy, but still full of life. We bought some provisions for the next few days, sampling some of the local sweets and then got into the car and headed for our next destination, not before stopping at the beautiful Fin Garden, a traditional Persian garden recently added to the World Heritage Sites.