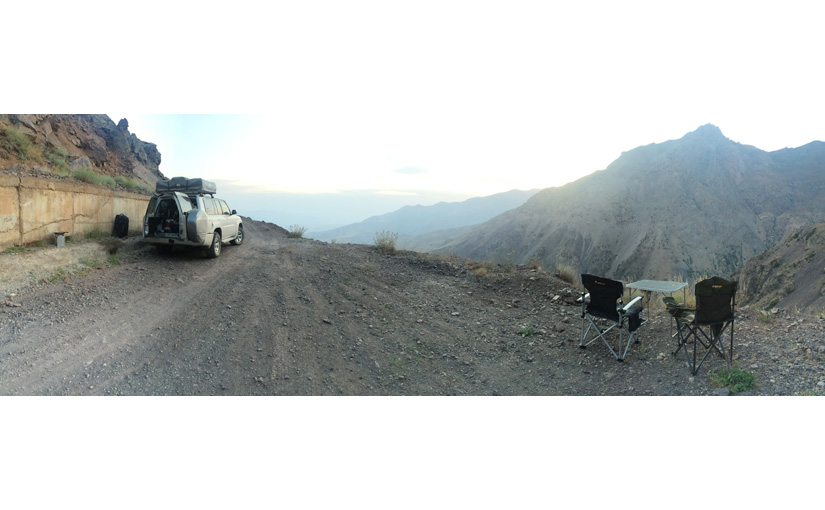 After Kashan we were supposed to head to Tehran, but changed our plans last minute and decided to check out the mountains instead. We were a bit tired of all the driving and the traffic in towns and heard that the scenery was quite beautiful, so why not? We then headed to a region called the Alamut Valley.  Honestly, we didn’t have big expectations but absolutely loved it. It all started with us taking an exit from the highway into a dirt track which we assumed would soon turn into tarmac. Well, It didn’t. We realized later that it wasn’t the right road, but we really didn’t mind as it took us through beautiful landscapes as we crossed the mountains and passed through small ‘off the beaten track’ villages.

Our stay in Alamut Valley was such a refreshing couple of days… The mountains were still bare but the valleys were full of greenery and little rivers, and the temperature dropped considerably vs the heat we experienced previously. We camped up in the mountains, above the Gazor Khan village (famous for its cherry trees and one of the Castles of the Assassins) and had an amazing view just for ourselves as we watched the last sunset of Ramadan (header photo).

I shouldn’t really be writing this (for my mother’s health sake) but before reaching our camping spot we had a bit of an ‘adventure’! We were following a very narrow off road track up the mountain which turned out to be blocked by rocks (probably fallen from the top of the mountain with the rain). This meant we had no option but to turn back and Catalin had to make a u-turn in a super narrow road while I was screaming ‘don’t do it’ and already imagining him and the car down the canyon. Luckily that was not the case, and we survived!

On a more positive note, we had a super hospitable Iranian family that initially passed us on their motorbike (husband and wife) and later came back with their daughters so they could talk to us in English. They gave us a couple of tips and suggested we head to the Caspian Sea through the mountains… and then returned back once again to give us enough cherries to last a month! We keep being surprised by how nice everyone is.

The next day we climbed up to the Alamut Castle, which would be a walk in the park, if it wasn’t for the fact that it was still hot and I was wearing a head scarf and long sleeves. I was melting like there was no tomorrow, but the view coupled with the fact that one of the Iranian men at the top just sat down next to us and started to sing old traditional Persian songs out of the blue, made it all worth it!

On top of that we met another really nice Iranian family, which was so happy that we were discovering the ‘real Iran’ and not believing all the ‘media propaganda’, so we ended up chatting with them for quite a while and obviously posing for a group photo. I love the kid’s pose on the photo – teenagers are teenagers no matter where you are in the world. Ah, needless to say that they also gave us cherries. 🙂