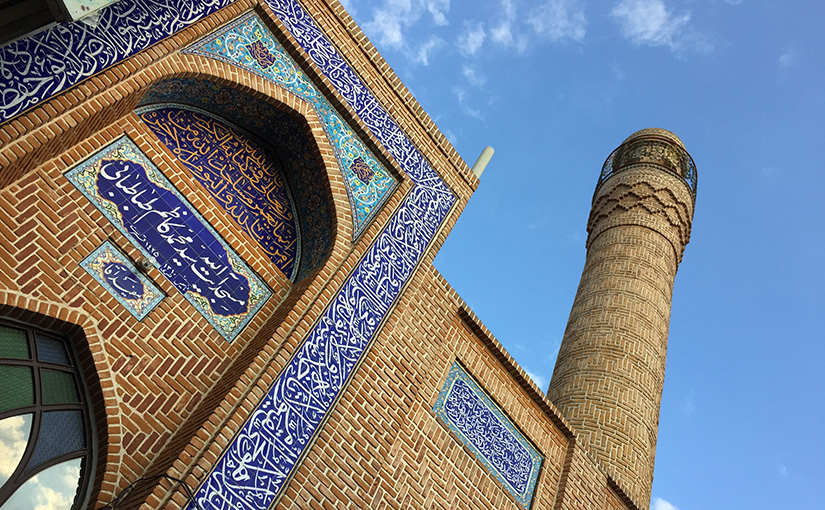 As we left Masouleh, we weren’t sure of the road we should take towards Tabriz. The GPS app we’ve been using for the phone (maps.me) always wants us to go through the shortest distance, which usually means dirt tracks in the middle of nowhere high up in the mountains.

We followed the directions for about an hour and ended up on a track that you could hardly see and the only human presence was the occasional shepherd. We finally made it to the road and decided to take the highway from there as it was getting late.

Finding the hotel in Tabriz was really easy and the hotel was about 1km from the bazaar which stretches over a huge area. We dropped our stuff at the hotel and went out to explore the city, trying to find something to eat. Unfortunately because of the last day of Eid, pretty much everything was closed so we ended up eating at some Iranian fast food place which was actually really good. &nbsp;Besides the bazaar, Tabriz looks actually quite European with a couple of large tree shaded boulevards and lots of modern shops. The next morning we ventured out into the bazaar and spent a couple of hours wandering the many alleys and courtyards adjacent to the main streets.

Before we headed for the Armenian border, we also stopped at a car washing place to get rid of all the mud we had accumulated in the mountains. This was probably a mistake as it got us quite late to the border where we reached at about 4pm.

This particular border closes at 5pm and the customs on the Iranian side was already winding down. We managed to speak with a friendly gentleman who got the car papers and went to open a few doors for us, getting us through in about 30 minutes. On the Armenian side things were a bit more complicated as the car was searched twice while the military guy who was doing the searching was telling me that this “is good car, but Mercedes is very good”! 🙂

There was no need for the Carnet for the car here and they were happy with just the normal registration card. We had to pay 50USD for the customs and then another 50USD for the car insurance in Armenia. The entire process took about one and a half hours.

We knew our stop for the night will be the first city after the border, which is called Kapan. It’s a fairly non-descript town, but we were very surprised to find a cheap, nicely renovated floor within an old hotel which was functioning as an independent hotel. Just to make this clear – someone took the top floor of an old communist times hotel, renovated and called it something else. It’s a bit more expensive than the main hotel, but much much better. We were also very surprised with some great pork ribs which were a nice change from the kebab and dizi (an Iranian stew) we’ve been having.