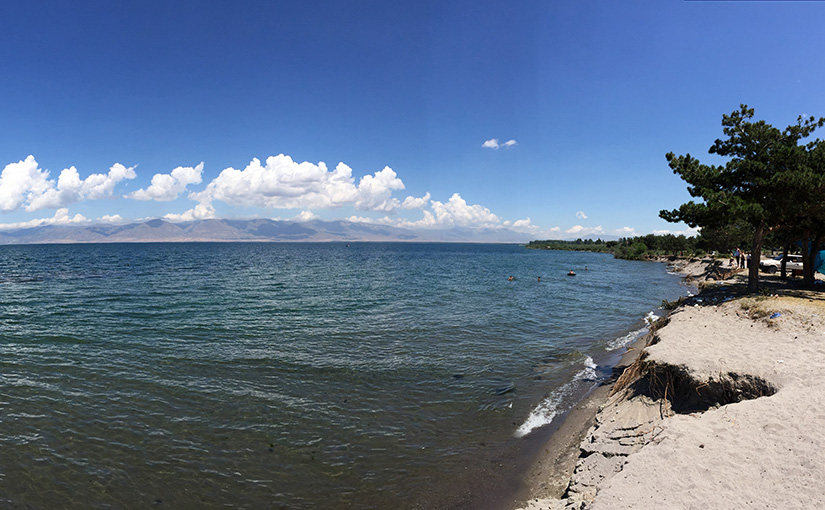 As we headed North in Armenia towards Yerevan, we had planned to stop for one night on the shores of Lake Sevan. Initially we wanted to drive up on the Eastern side of the lake and then round the top coming down into the main town of Sevan.

As we did take the Eastern road it very quickly became clear that “road” is a very loose word and that it would take forever to navigate the huge potholes. We turned back, stopped for a one hour picnic on the lake shore eating some of the left-overs from breakfast (sausage, cheese and bread) and then took the more modern Western road around the lake. Sevan Lake is one of the largest high-altitude fresh-water lakes in the world sitting at about 2000m and being 78km long at it’s longest point and 56km at its widest point.

The lake has a couple of beautiful monasteries on its shores and as you get close to Sevan it becomes obvious that it’s a favourite holiday spot for Armenians. As Armenia is a land-locked country, this lake comes pretty close to having an in-land sea. It has waves and lots of wind. I would have liked to try a bit of kitesurfing on the lake, but the area where we were didn’t really have any beaches wide enough to launch a kite. I had read there might be some areas on the Eastern side of the lake, but that would have required more time than what we had.

The hotels and guesthouses around Sevan looked fairly bad, but we did come across a very random Best Western Hotel (random in the sense that we didn’t expect one there) right on the lake. The rooms were reasonably priced, so we checked in for the night and enjoyed a coffee by the lake. For dinner, we decided to go to a near-by village called Dilijan which is a beautiful spot in the mountains and had dinner at a great little restaurant called Haykanoush, trying some of the local delicacies (definitely try the “warm gata” walnut desert).

The next morning we caught up with some emails by the lake and then left for Yerevan.