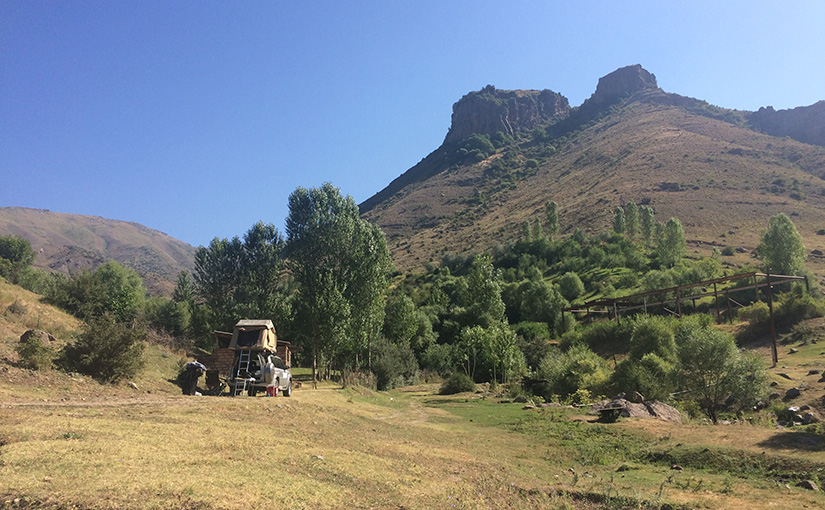 Sometimes there is so much happening on the same day that I actually feel that a whole week has passed… Luckily it hasn’t and there is still so much ahead of us.

Armenia couldn’t be more different than Iran – we keep driving through mountain roads full of greenery and lushness and instead of finding mosques at every corner, one finds monasteries! The first one we visited was actually not marked… And apparently undiscovered until 1920! You drive through very dense forest and then suddenly there it is, a bit like a mirage that you are not sure of. The road up to the small monastery was full of butterflies flying in front and around us, which made it all even more magic and spectacular.

Next, we drove to Tatev Monastery which is definitely a must. The beautifully conserved monastery is perched on a cliff which makes it look very impressive and really makes you wonder how hard it must have been to build and to maintain.

Another great thing about all the monasteries we have been up to now is that they are all really nicely renovated (despite some of them being built as late as 100 AD and suffered several earthquakes) and that they are all for free! Most mention that the renovation was paid by European Union and USAid funds which I thought was interesting.

We didn’t really know where to go for lunch but we found this super cute place by the road, with really nice wooden cabins overlooking the valley, called Harsnadzor Guest House & Restaurant. As most Dubai western expats would, we feasted on pork chops and pork bbq; enjoyed delicious Armenian cheese and drank ‘compote’, which is this kind of bottled juice which still has the fruit inside. This place also had rooms overlooking the valley in this kind of wooden cabins – we really wished we had known about it before as we would have preferred to stay there rather than in Kapan. Lonely Planet, take note!

We then kept driving towards the Yeghegis Valley, enjoying the scenery and the drive and looking forward to finding a nice camping spot.

We had read about another cool monastery (Tsakhatskar Monastery) and thought that maybe we could camp nearby and have a chilled, relaxed time. But the evening had a bit more excitement waiting for us… As we reached the area of the monastery we came across an Armenian family, having a picnic by the river and were straight away invited to join them. Before we knew it we were part of the family, being served grilled chicken, pork, home made Armenian cheese, bread and… vodka! Lots of vodka! Every time I looked, the men and Catalin were cheering for a different reason, including cheering to us, cheering to us having lots of children, cheering to them, cheering to their mother in law dying (apparently an Armenian tradition), cheering to friendship, etc, etc. All I saw was shot glasses up in the air. Luckily for me, I got a glass of nice Armenian cognac which only got refilled a couple of times. 🙂 Before we knew it we were all dancing on the grass to Armenian folk songs and having a great time. The picnic was a celebration for the fact that their two kids were going to university and we were so glad to be part of it! What a fun and happy family. Mum, dad, grandparents, get ready for a picnic next time I’m in Portugal! Time to bring back the good old times. 🙂

After our picnic it was then time to set camp and enjoy a beautiful starry sky and clear views of the Milky Way, with the occasional shooting star. Obviously, no one could drive the car at this stage so we just stayed where we were, in a nice plateau by the river.

The following morning we finally headed up to the monastery we where looking for the evening before, which turned out to be quite a mission. The road was proper off roading material and the 2.5km climb up took us almost 45 minutes. And then we had to drive down which was even harder with our ‘small’ 1.5 tones car. But once again it felt really special to have such a place just for ourselves and totally worth it!