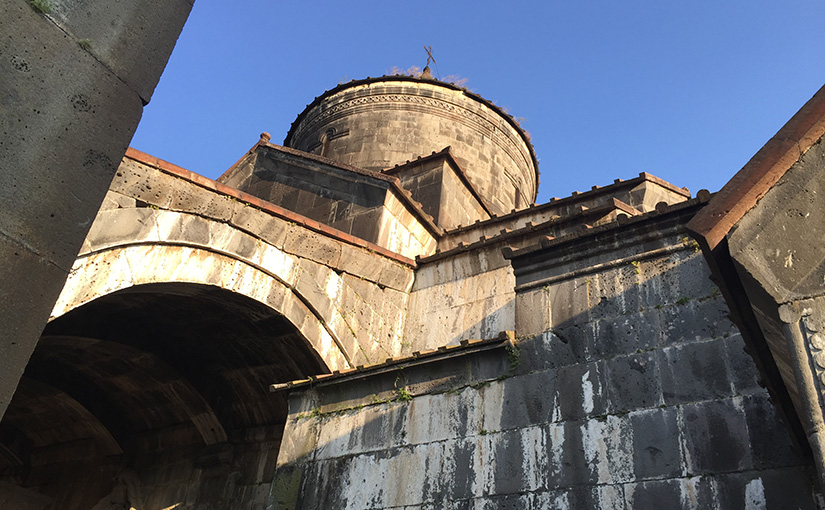 For our last night in Armenia we headed towards the Debed Canyon in the northern part of the country. Besides being an interesting area, this is also the main road linking Armenia and Georgia so it tends to get quite busy at times.

When we were researching the trip a few months ago, we read about a very cool boutique hotel here and although we wanted to book it for one night, it was already saying it was full. Once we got close to the hotel we thought we’ll give it another try and sure enough, the lady at the reception said they had a couple of rooms available and she was willing to give us a 40% discount – this worked out about 30% cheaper than the Trip Advisor price we had seen months before. The hotel is right by the river, has an indoor swimming pool and in general it looks very pretty with a lot of attention to detail.

As we got there fairly early, we headed for the two UNESCO World Heritage monasteries (Haghpat and Sanahin)  in the area to catch the sunset there and hopefully make some good photographs. The light was beautiful when we got to Haghpat making everything glow with the late afternoon colours. Both of these monasteries were built between the 10th and 13th century and it is assumed that both were built by the same craftsmen.

On our way back to the hotel we stopped at a restaurant on the side of the road to grab some dinner only to find ourselves in the middle of a big wedding party with very loud Armenian music. We found a quiet corner at a table in the garden and ate while preparing our route for Georgia.

The next morning, we drove the remaining 40km to the border and to our great surprise spent only 30 minutes doing the formalities with a Georgian custom officer asking me if this was my first time in Georgia and telling me that I will definitely come back. I think he was right!