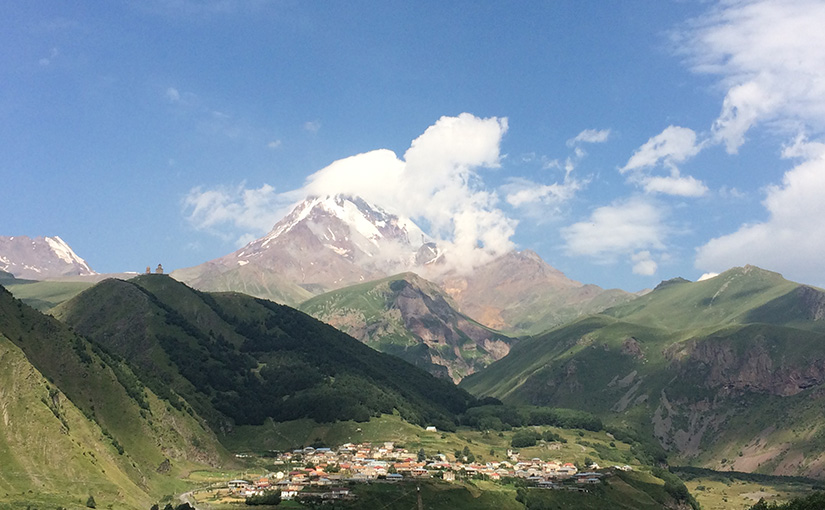 Reaching Georgia was super easy. The border was such a smooth experience and in less that one hour we were out of Armenia and into Georgia. Yay!

I’m totally in love with Georgia and very pleasantly surprised with everything we have been discovering everyday. I was expecting it to be similar to Armenia and also very connected to Russia but I’ve been noticing that he has also very deep roots connecting to Europe, which you can see in the architecture and the warmness of people.

We spent our first day in Georgia in Tblisi, just walking around town and watching people pass by while sitting in cafes having fresh lemonade with mint (super recommended). I really enjoyed the old town – it has a really nice vibe and it’s very pretty! The interesting bit is that there are also quite new and contemporary architecture buildings very close to the old down, which creates an interesting mixture of colors and aesthetic.

Afterwards, we took the cable cart to the top of the hill to see the town from atop and then walked down, taking it all in. It was a very chilled out evening even though the city was quite busy as the Youth European Olympics were also happening in town and starting the day after. Everywhere you looked there were signs welcoming the athletes – it looked super well organized.

We then headed to the mountains to an area called Kazbegi, and that was another pleasant surprise.

However, before reaching Kazbegi we passed by one of the nicest monasteries of our trip. Not necessary because of the monastery itself, but it’s location. It faced a beautiful blue water reservoir and it was surrounded by lush hills which created such a beautiful setting.

After visiting the monastery we drove to the reservoir and couldn’t help having a little swim! Surprisingly the water wasn’t as cold as expected and Catalin still stayed for quite a bit. I was still not 100% recovered from my ‘stomach bug’ the day before (I blame the mushrooms!) so I settled for dipping my delicate feet in the water thus also confirming the water was not that cold indeed. 🙂

After such a refreshing break it was time to keep moving. Kazbegi is a super tiny little town up in the mountains, but it has an amazing view over the mountain peaks which are still covered with snow. Another highlight is the beautiful church / monastery which was built right on the top of one of the hills, having the snowed in mountains as a natural background. We ventured out with our car all the way up for another interesting off road adventure and was just taken away by the beauty of the place. It is just so peaceful and beautiful – really breathtaking!

We really loved the place and already looking into ways of coming back! There is another town down the road which has skiing slopes, so maybe some skiing adventure awaits for us next year in Georgia.

2 thoughts on “Discovering Georgia – from Tbilisi to Kazbegi”