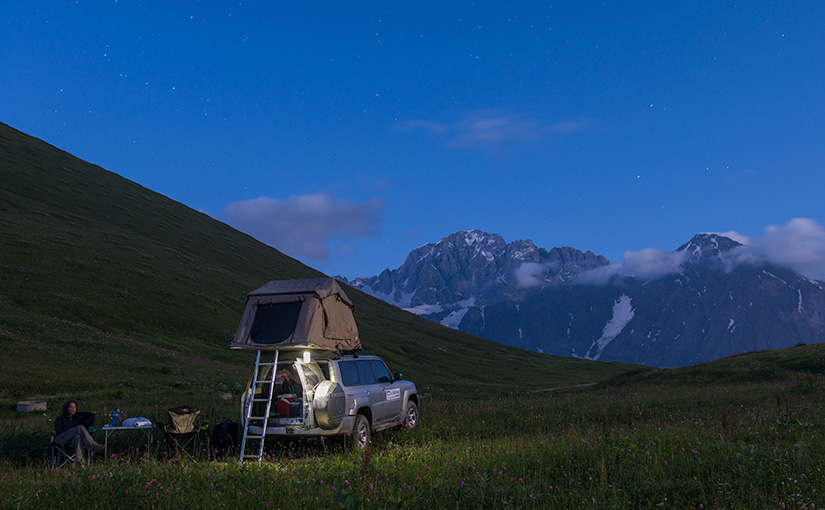 As we moved on from the Kazbegi area, we knew we wanted more of the beautiful Georgian mountains so we did a bit of research trying to figure out which way is the best way to go into Svaneti, a mountains area also in the North of Georgia, but slightly more towards the West.

Most people (and maps) were saying that we should be driving all the way west and then start going north towards Mestia as that would be the only way to access the Upper Svaneti and the village of Ushguli. However, we have a good printed map of the Caucasus region and we noticed there was another road (not a very good one though) that would allow us to do a big loop through Svaneti.

The plan was put in motion and we headed towards the town of Tskaltubo, a former communist spa town (the subject of a detailed future post), where we would spend the night in order to be able to start the difficult road early the next day.

As we woke up we visited the very interesting Prometheus Cave nearby and then started heading towards the mountains. The road was very good to begin with, but as we moved closer to the Caucasus range, it turned into a dirt track and then it got bumpier and bumpier.

After about 3 hours we were getting quite hungry so at the first village that had a sign saying “shop” we stopped to see if we could buy a few things. An old lady welcomed us in the shop and through sign language asked us if we would like to eat something. This turned into the best launch of the trip for us, with fresh tomatoes and cucumbers from the garden, home made cheese and raspberry jam and what we call in Eastern Europe “slanina” – slices of pork fat with very little meat. It was absolutely delicious!

We carried on and for the next 5 hours we were rattled on a very bumpy road that was also incredibly beautiful. 4000 and 5000 meters peaks started showing up on the horizon and the meadows were lush and full of flowers. We were planning on camping the night and we reached the village of Ushguli just before sunset in time to get some provisions for dinner and breakfast the next day.

We found a great camping spot about 10km away from the village with a perfect view of the high mountains around. As we were at 2600m, the temperature dropped quite quickly (the lowest it got during the night was 7C) and we got into the the sleeping bags fairly early still dreaming about the lunch we had had earlier. In the morning, we realized that because of all the beautiful flowers around, there were also a lot of wild bees, which took a liking to our breakfast. I have no issues with bees, but for Ana this was a bit much so she had the fried eggs while sitting in the car. 🙂 We packed up and headed back towards Ushguli to check out the village during proper daylight. We spent a couple of hours just looking around and sitting down having some coffee and generally just enjoying the views.

The road down towards Mestia was much easier and we kept calling it a highway although it was still a dirt track.

2 thoughts on “Svaneti and the best lunch ever”