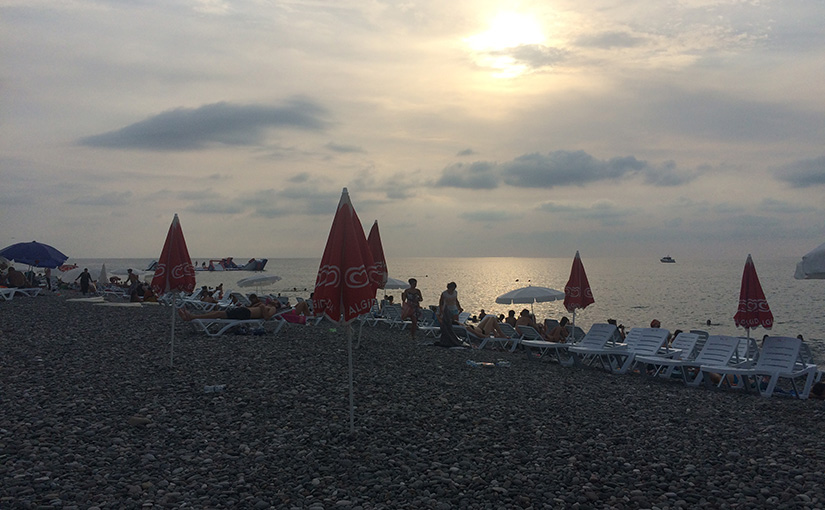 After some rough days of off roading tracks, bumps, more bumps and lots of curves in the mountain roads, we decided to stay in Batumi for two nights instead of our initial plan and just chill out. I still had plenty of Starwood hotel miles, so we chilled out in style at the Sheraton Hotel, which greeted us with an upgrade and a beautiful view over the Black Sea.

Batumi is a coastal city by the Black Sea that becomes Georgia’s party/beach central during the Summer… or so we thought! Although the city clearly felt like a beach town with all the traffic and everyone walking around in shorts and bikinis (it sounds silly but once you live and travel in the Middle East it takes time to adjust to seeing people in skimpy clothes walking around normally) we are not so sure about the whole ‘party atmosphere’ as most of the bars/clubs we saw at the promenade were quite empty around 1am.

I will spare you the details about how big the swimming pool at the Sheraton is and how amazing the weather was. But I can tell you that once again we were very surprised by the city architecture (like in Tbilisi). You see quite a lot of new buildings with very contemporary design. One of them had a ferris wheel on the top, on one of the sides. Apparently you can actually have dinner in it as it’s a restaurant – take note Dubai!

Obviously, since this was my first time at the Black Sea, I also had to take a dip and try the water! 🙂 The water was surprisingly pleasant, but then again, Catalin says that I would probably say that about every sea I go into after growing up holidaying in the Atlantic Ocean. Fair point.

What I didn’t expect was that it was a pebbled beach… Not the easiest to walk around barefoot but it made for a couple of funny scenes of me trying to balance myself, walking into the deeper sea area.

After a couple of ice creams, some nice Georgian meals and a 5€ parking fine (the police officer fined us two minutes after we parked, while we were ate the queue to pay the parking!!) it was then time to say goodbye to Georgia and head to the border.

One thought on “Batumi, Batumi”