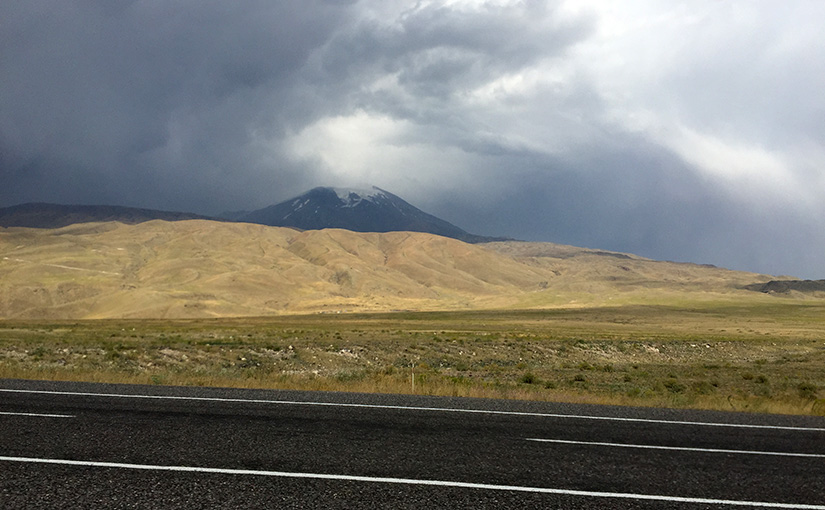 Once we made the decision to go South (see previous post), we got to Van fairly late driving slowly and enjoying the views. The drive from Kars was beautiful passing Mount Ararat (an extinct volcano) and a huge rock field (probably lava) which looked very similar to the lava fields I’ve seen before in Iceland.

The main reason people stop in Van is the huge lake with the same name. Together with Lake Urmia in Iran and Lake Sevan in Armenia, Lake Van is considered one of the three large lakes of the former Armenian Kingdom and together they were called the Seas of Armenia.

As we were a bit worried about having the car parked in the center of the city due to all the troubles that region of Turkey is experiencing we looked for a hotel by the lake and we found a really nice one online (actually quite fancy) and headed straight there. The staff at the hotel were very friendly and they even told us to park the car right in front of the hotel’s entrance – for those of you who live in the UAE, this felt a bit like parking those Ferraris in front of the fancy hotels!

We got our bags in the room, briefly checked out the two weddings happening at the ground floor and then headed for a fish restaurant right by the lake recommended to us by the front-desk manager. We ordered a big fish to share and during the meal we kept saying that it tasted so good and not like lake or river fish at all. To our surprise the restaurant owner confirmed that this was indeed not lake fish, but fish from the sea – he actually looked a bit insulted when we asked if this was from the lake!

One of the other reasons why Van is famous is the breakfast. I discovered this the next morning, when I had some delicious traditional cheese with honey and halva right before going to Nissan to service the car (Ana was still sleeping as there was no need for both of us to go to the service).

I had previously arranged with Nissan Turkey to service the car in Van as we had already driven about 5000km from Dubai and since it’s a long trip it’s better to be careful. Luckily the service was just 5 minutes away and the guys there were super helpful even if they didn’t speak a lot of English. It was just a standard check-up and an oil change, but they thoroughly checked everything else and confirmed everything was in perfect condition.

With the service done I got back to the hotel, we caught up with a few emails and started the next leg towards Tatvan along the Southern part of the lake.