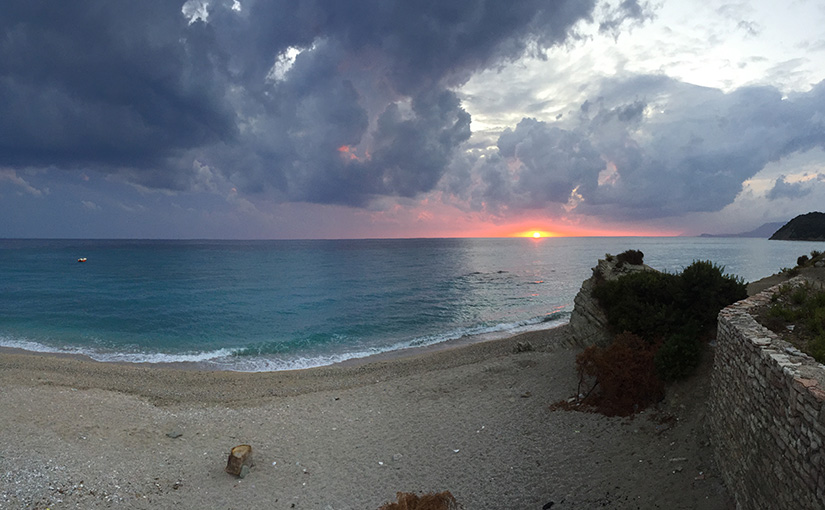 As I’ve mentioned a couple of times before, we ran a bit behind with the blog as there were things happening every single day, so instead of trying in vain to catch up with everything, I am skipping a couple of parts from Turkey and Greece for now (Ana is busy writing some of those posts) so I can post some of the more recent stuff.

After my brief time in mainland Greece and dropping Ana at the airport, I headed North towards Albania, a new country for me, a country I had heard so many good things about.

The border crossing was super quick and my first planned stop was the village of Gjirokastra, a small traditional village perched up on a steep hill with beautiful traditional houses and a great castle overlooking the valley. The houses are really particular as their entire roof is made out of thinly sliced local rocks. They basically arrange the slabs of rock just as you would arrange normal shingles with the difference that each square meter of roof can weigh up to 550kg! They look really cool and provide lots of photographic opportunities once you get high above the village.

The castle is also really interesting having had a very busy history being one of Al Pasha’s main castles in the 19th century, a military garrison during World War II and a political prison during the oppressive communist years. Apparently, the jail was notoriously famous during the communist times and the museum inside the castle provides a really interesting look into that period.

From Gjirokastra I headed up over the mountains towards the coast looking for a place to open my tent for the night, but not before stopping at a very famous local attraction called the blue eye. This is a strange underground spring where water gushes out forming a river and because the river colour is very green, while the spring is very blue it resembles the iris of an eye.

I passed through the town of Sarande, which although quite pretty, was a bit too touristic for my taste. I drove a little bit further North trying a couple of small roads towards the beaches dotted at the bottom of the steep slopes until I found Lukove Beach, a beautiful little bay with just enough space for my car and a couple of other camper vans to park for the night.

At the about the same time I parked my car and opened up the tent, a young German couple also showed up in their minibus / camper van and setup right next to me. They were really nice and after talking for a while they invited me to have dinner with them as they were preparing a really nice looking vegetable stew with some feta cheese on top.

As it got dark the sky started lighting up in all directions with lighting and as I retreated to the tent I was getting a bit worried since I had not yet tried the tent in rainy conditions. Oh and it did rain! But not a drop inside!

The next morning I packed up quite early, paid 5 Euros for the camping spot to a local who was renting it out and then started driving further up the coast.

From here the road got really busy with tourists and Albanians on holiday and although it was a beautiful drive it was very slow going.

My last stop on the coast was going to be Durrës, a larger, more touristic town fairly close to the capital Tirana. When the guy at the reception saw I am driving all the way from Dubai, he upgraded me and gave me a really nice room on a high floor with a great view of the sea. I didn’t do much in Durrës, except for walking around the corniche and the center part of town where there were a couple of local hip hop artists singing on a stage. It looked like there was some sort of festival going on as there were also lots of graffiti being drawn on canvases. I can’t say I’m too fond of Albanian hip hop, but maybe it’s because I don’t understand the words.

The next day I briefly passed through Tirana, which was chocked with traffic so I decided to just keep going towards the mountains in the North of the country.