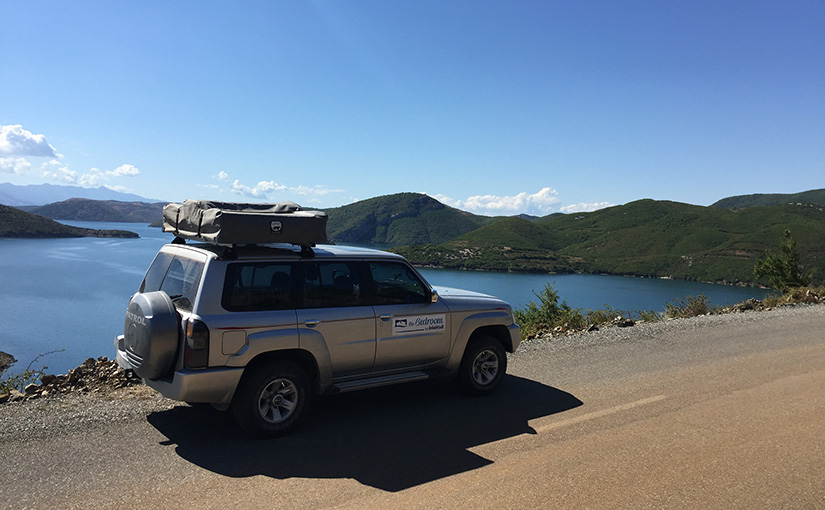 Although the coastline in Albania was beautiful and I really enjoyed my time there, I was looking forward to seeing some of the Albanian mountains I had heard so much about and that’s when I started leaving the sea behind and heading inland towards the Komani Lake.

The Komani Lake is an artificial reservoir resulted after the building of a dam on the Drin river which was completely filled with water in 1986. The unique thing about this reservoir is that a ferry service runs along most of the lake through beautiful canyons. Before doing this section I had done quite a bit of research and although it looked like in the previous years the ferry over the lakes had become only a passenger ferry, I was happy to read that starting this year the car ferries were back in business which meant I could take the car with me on the river and then come back from the mountains using a different route.

The road from Tirana to the small village of Koman (the starting point for the ferry) was fairly easy and uneventful, although a bit busy. I got there in a couple of hours and as soon as the road started climbing, the landscape changed and the forests got thicker and thicker. I stopped to buy a few things at a village on the way, since I knew I will be camping and I wanted to be prepared and have some food with me in case I couldn’t have dinner in Koman.

I got there around 3pm and after stopping for a home made goulash at a local guesthouse I made my way up towards the dam to check the timings for the ferry and see if I can get a ticket. The guys there were very helpful and although the price was a bit steep for the 3 hour trip (50 Euros), they told me that if I wanted I could just open the tent on the ferry and sleep there instead of paying at the camping ground in the village. I agreed and said I will return before sunset once I have explored the area.

I headed back down towards the village and took a side dirt track that led me right by the river where I spent a couple of hours doing nothing but enjoying the sunshine.

Around 6pm I got back to the ferry, loaded the car and prepared the tent for the evening. There was another Polish couple with a car and a Polish guy with a motorbike who were sleeping on the deck, but I think I had the most comfortable sleep as it got quite cold during the night and I was happy to have a tent over my head.

At 9am the next morning, the ferry ride finally started and it was every bit as spectacular as I had heard. It’s only 3 hours long, but the landscape changes dramatically every 30 minutes or so as mountains appear from behind bends in the river and then quickly disappear as you move further upstream.

Once I got off the ferry, I continued with a short drive towards the village of Valbonë, which sits right at the foot of the tall mountains that separate Albania and Kosovo.

After I had lunch there, I decided to drive back towards Shkodra, as there was one more part of the Albanian mountains I wanted to explore over the next couple of days.