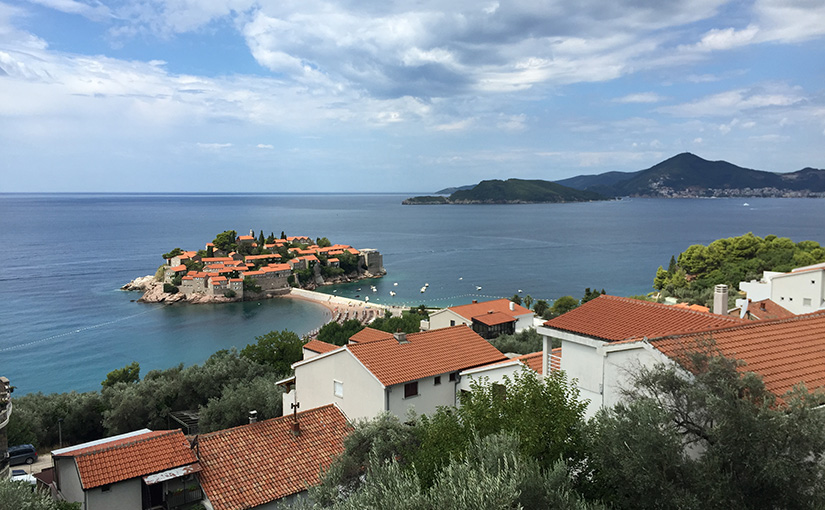 Unfortunately, Montenegro was my shortest stop of the trip as I basically simply drove along the coast stopping in a couple of places and only sleeping one night in the country.

Once I crossed the border from Albania into Montenegro, fairly early in the day, I headed for a town called Ulcinj which is a bit of a paradise for kitesurfing in the summer as the winds tent do be good. I had no patience to stop in town as the wind was already blowing so I went straight to the kitesurfing beach, pumped up my kite and got into the water. I had a couple of really good hours kiting and then I started thinking about where I will be spending the night.

One confusion was that in my rush to get to the beach I had forgotten completely to ask anyone about changing money and since I had no wifi either I didn’t even know what the currency is and how much I should withdraw at the ATM. I called Ana to ask her to check for me and to my surprise she said Montenegro is using Euros. I had no idea! So with that sorted, I went to a camping spot right on the beach and for 15 Euros got myself a spot for the car pretty much on the beach. Although it was nice, it was definitely different to not camp in the wild anymore and be surrounded by massive camper vans with satellite dishes perched on top of the roof.

The next day, I started heading towards the border with Croatia, since I needed to be online by maximum 7pm as I was teaching an online photography workshop in Cairo.

The road is spectacular with many small islands dotted along the coastline and an amazingly still blue sea. I stopped in the beautiful city of Budva, which was as pretty as I had remembered from my childhood when I visited with my parents.

As I got close to the border around 2.30pm I started to realise that my goal of getting to the hotel at 7pm in Croatia might be a bit optimistic. The line of cars at the border was about 10km and it was moving very very slow.

I finally arrived at the actual border at around 6.30pm thinking I’ll still make it when the guy at the border told me I had to buy the green card (insurance) for the car and that unfortunately the lady who sells this only comes every half an hour or so. This was probably one of the few mistakes I made in this trip as I didn’t do enough research before leaving to try and buy the green card for the European Union before starting the trip. When she finally arrived, I had to pay a whopping 320 Euros for 30 days of insurance which borders on ridiculous. But I paid, moved on really quickly and got to my hotel in Croatia a little bit late for my talk.